The U.S. beer market has risen to a massive $100 billion as of 2021, up from $94 billion in 2020. Independent craft beer sales have risen by 8%. It makes sense; people are returning to bars as covid restrictions continue to lift. And who could resist a refreshingly cold, carbonated brewski?

Where Do Those Beer Bubbles Come From?

Beer bubbles, known as carbonation, come from carbon dioxide. When the yeast in beer ferments, it naturally produces carbon dioxide. However, the carbon dioxide that comes from brewing beer can be expensive to harness for a small craft brewery. As a result, these breweries often simply release the CO2 into the atmosphere and purchase commercial CO2 tanks to add to the beer. That’s right… the very same CO2 that makes beer nice and fizzy is the primary greenhouse gas produced by human activity. By all means, brewers should hang on to it!

But instead, carbon dioxide for beer production is often purchased as a by-product from various chemical industries. Typically, these would include ethanol, fuel combustion, natural gas production, and chemical synthesis.

Not for the future of the planet and the delightfulness of beer alone; recapturing and reusing CO2 in beer production can make the beer higher quality and better tasting. It can also help breweries save money in the long run.

There are machines that capture CO2 from beer production. But as mentioned, they are not cheap, and businesses can expect about three years from purchase time to see a return on investment. In the long run, the machines save money. But in the short term, buying CO2 tanks in bulk costs less. It’s bad news for sustainability, and it’s not great for beer retailers either, who foot the burden of higher beer costs from expensive CO2 supplies.

CO2 Prices Are On The Rise

How could they not be? The pandemic, inflation, supply chain issues, and labor shortages affect every industry. The staggering cost of gas means the price for delivering CO2 tanks has gone up. Aside from the CO2 tanks, beer prices are rising for the same reasons. Add to that, with both Russia and Ukraine being significant exporters of wheat and barley; the Russo-Ukrainian War has impacted the supply of key ingredients in beer.

Those cost increases get passed on to retailers and consumers. So now is a crucial time for bars, pubs, breweries, restaurants, hotels, stadiums, and any business that serves beer to look for cost-saving solutions.

An investment that can reduce the bottom line for beer retailers is a Cooler Concepts keg lifter. A keg lifter can help with labor shortages by replacing the need for workers capable of lifting and transporting kegs back and forth from the cooler to the bar. A full keg can weigh over 160 pounds, and an empty keg still weighs about 30 pounds. It’s no joke adding and removing kegs from the tap. 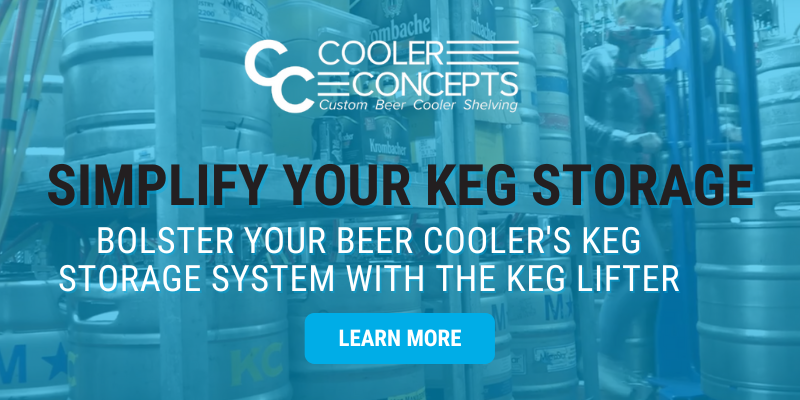 Working in the bar and restaurant business is hectic work. Making sure staff have quick access to...
Read More

The Importance of Handling Kegs Safely in Your Bar or Restaurant

If you run a bar or a restaurant that serves alcohol, you know that beer kegs are essential for...
Read More

Steel Or Aluminum: Which is Better?